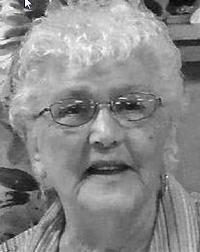 Born Sunday, March 28, 1937, in Hagerstown, she was the daughter of the late Emmitt Charles Norcross Sr. and the late Isabel B. (Staubs) Norcross.

She was employed with the Washington County Board of Education at the cafeteria at Western Heights Middle School, she was later employed and retired from Good Humor Breyers. She most recently was employed at Funkstown Firehouse Grill. She was a lifelong member of St. Mark’s Lutheran Church, where she was active with the Food Bank. She enjoyed playing bingo and cards with her grandchildren and great grandchildren, who were very special to her. She was a loving wife, mother and grandmother and will be greatly missed.

She was a graduate of Hagerstown High School class of 1955.

She was preceded in death by one brother and two sisters.

Interment will be at the Cedar Lawn Memorial Park, Hagerstown.

Online condolences may be expressed at www.douglasfiery.com.